You are here: Home / Invitations to Play / Four Yarn Sensory Bins
Share on TwitterShare on FacebookShare on PinterestShare on Email

We’re back for the next post in our Y is for Yarn series. Last week I shared some of the books we enjoyed reading about yarn. Early in our theme we made a yellow yarn sensory bin. Throughout the week we added new materials to create four sensory bins for play and learning. This was an easy way to incorporate activities that were both fun and engaging for the toddlers and preschoolers to enjoy together.

And as I mentioned in my previous post, we studied this theme last year, so all my littles look about a year younger than they are now. How time flies!

The first day of our theme the preschoolers and I spent some time cutting bits of yarn from my mother’s yarn collection. This was also great fine motor practice.

If you don’t have a yarn collection, you can see about borrowing old scraps from a friend or buying small skeins of yarn from craft stores. We tried to include yarn in different shades of yellow and with different textures and widths.

To set the stage for some measurement activities, we were also sure to include various lengths, ranging from very short to very long.

This large bin of yarn sat out as an invitation to play and the kids were free to explore it throughout the day. Our littlest friends loved running their hands through the yarn and feeling the soft texture. They also liked burying their hands and then watching as the yarn fell to the sides as they raised their hands in the air. 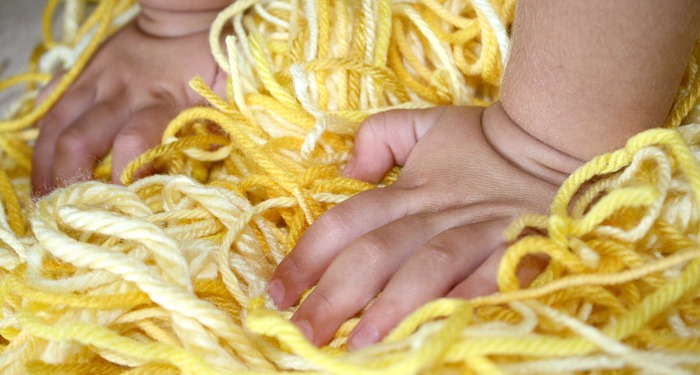 Of course, there was a lot of silly play, too. We all wore very stylish yarn wigs, and there was more than one yarn fight. (If you prefer your little ones to keep the yarn in the bin, you may want to discuss that beforehand.)

There was also a lot of pretend play. Here Tinker is making yarn soup for all of her babies. During this process we were able to discuss vocabulary like full, empty, and all gone.

One day we had a scavenger hunt to find all of the small yellow toys throughout our house. This was fun for all of the kids to participate in, and it was one of the ways were worked on recognizing the color yellow.

The next morning I hid all of the items in the yellow yarn sensory bin.

The kids were excited to find them there, and they used them for even more pretend play.

I also used the bin as a way to practice vocabulary with the toddlers. We practiced naming objects.

We also chose three objects at a time and then hid one in the bin. The kids played a game to figure out which object was missing from the set of three. Then they went digging in the bin to see if they remembered correctly.

The preschoolers and I also played I Spy with this bin as a way to practice using descriptive details.

Another day we sorted through our magnetic letters and found all the yellow ones. As we did so the toddlers were again practicing color recognition, and the preschoolers were practicing letter recognition by naming the letters we found.

Later all the letters we collected we hidden in the bin.

This activity was intended more for the preschoolers, but the toddlers also enjoyed finding the letters and lining them up in rows. As they did so I names some of the letters for them.

Preschoolers can use this bin in a variety of ways. Depending on the letters you have available in your collection, they could:

For the last yarn sensory bin activity I used our label maker to add numbers to yellow Lego Duplo Bricks. I labeled 20 blocks from 1 to 20 and buried them in the sensory bin. By now the kids expected something new in the bin each morning so they went straight there first thing.

As with the letter bin, this one was designed more for the preschoolers. However, as the toddlers found the Legos and stacked them together I said the name of the numbers for them.

Preschoolers could use this bin to:

Overall these sensory bins were a really easy way to incorporate many learning activities into our Y is for Yarn theme, and the kids had a lot of fun playing with the materials each day.

Next week I’ll be back to start sharing some of the art activities we did to go along with this theme.

This post has been shared at some of these fantastic link parties.